Mythology and the Erosion of Inerrancy in Evangelicalism 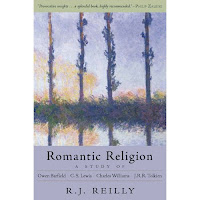 I’ve been listening to the Albert Mohler Internet radio program for several years now and have always gotten a lot out of it. Albert Mohler is the president of Southern Baptist Seminary and a staunch defender of biblical inerrancy. I enthusiastically agree with much that he says. Recently though he featured two apparently inconsistent broadcasts, one promoting biblical inerrancy and the other promoting Romanticism. I noticed the inconsistency because I listened to them closely together on my MP3 player:

The one on storytelling is a celebration of mythology hosted by Dr. Russell Moore, the dean of the school of theology at Southern Baptist Seminary. Dr. Moore proudly explains how he incorporates the stories of J.R.R. Tolkien into his devotional times with his children. Unfortunately, I’m sure Dr. Moore doesn’t realize that what he’s giving to his children is mythology. Tolkien viewed it as mythology; Lewis viewed it as mythology; and both men considered mythology divine revelation.

Now, in the other program on the erosion of inerrancy in evangelicalism, Dr. Mohler bewails the intrusion of mythological thinking into current views of the Bible.

Apparently some of those theologians and Bible scholars who were raised with Lewis and Tolkien are now carrying that love of mythology into their work, ignoring the Scriptural warnings against the love of mythology, and passing it onto their children.


I’ve spent many years studying the issue of Romantic religion (for background, see my article "’Christian’ Romanticism, the Inklings, and the Elevation of Mythology”).

R. J. Reilly’s book Romantic Religion: A study of Barfield, Lewis, Williams, and Tolkien originally inspired me to begin studying this topic. Since then I've come to see how this Romantic religion is not evangelical Christianity and, as a matter of fact, is quite opposed to it. Yet this Romantic religion in the form of the writings of — especially — C.S. Lewis and J.R.R. Tolkien has swept through the evangelical world and been uncritically accepted as almost universally authoritative in many prominent Christian venues. I have also come to believe that there is a very strong connection between the attitude toward the inerrancy of Scripture that Dr. Mohler is so concerned about and the teachings of this Romantic religion, especially as it appears in the works of C.S. Lewis.

I just got a book called C. S. Lewis on Scripture by Michael C. Christensen (1979). The book is an apologetic for Lewis’s attitude toward Scripture, including his belief in purgatory and that the penal substitution is just one of many theories that can be put aside if found troublesome. That attitude is exactly the one that is appearing among these new “evangelical” scholars that Dr. Mohler is so disturbed about.
Posted by Richard Nathan at 8:27 PM