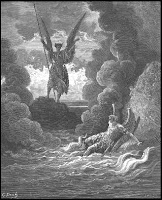 There is a war going on that most Christians don’t recognize. I call it a war of Romanticism, and it's all well documented in numerous books and articles.

How does this war affect the everyday lives of Christians? It affects them a lot. For one thing, we have friends who are caught up in this war and made captive by it without really realizing it, to the point of even (unknowingly) naming their children after witches in fantasy stories.

We’ve mentioned before what tremendous shifts are going on in Christian thinking and worldview. One of these shifts is the enormous influence of imaginative literature in the lives of Christians, a shift some of whose effects I see particularly among young people. We are seeing Christians whose focus is becoming increasingly focused upon fantasy rather than Scripture. Why? Because of the progressive dominance of Romanticism in Christian literature.

Connected with this shift is the escalating use of street drugs both in the general culture and in the Church (especially in church youth groups). I am convinced that there is a strong connection between this love of imaginative literature and the escape into drugs. I have personally seen children of fervent evangelical Christians, raised within a close community, turn to drugs. Influenced by Christian “culture heroes” like Donald Miller, whose book Blue Like Jazz, promotes drugs and liberalism, they are simply swept away. (See my critique of Miller here.)

I have also met Christians who have gotten tangled into drugs and ended up on the psychiatric unit where I work. At that same unit I often see people tattooed with occult symbols, including runes (Celtic magical symbols used in The Lord of the Rings). These same people are reading and deeply engaged in games involving imaginative literature, especially mythology and fairy tales. The connection can be very strong because many street drugs—especially LSD, Mescaline, and marijuana—stimulate the imagination and can open the mind’s door to the occult. (I speak from experience.)

Can fairytales really be harmful?

The answer I have seen in my studies of recent history is yes. I’ve been reading a book called Metapolitics: From Wagner and the German Romantics to Hitler by Peter Viereck. Fantastic as it may sound, this thick and impressively documented book reveals the powerful influences arising from a love of mythology and fairytales that influenced Germany (and especially its youth) and led directly to Nazism.

Following is a list of some relevant books and articles I’ve been reading lately that are giving me deeper insight into the strong connections between Romanticism and the resurgence of paganism:

Viereck explains conclusively how Romanticism so changed the worldview of everyday Germans that it actually shaped political history and led to the Third Reich—which was a political, Romantic crusade. Viereck is a very interesting man uniquely suited to tackle this subject. A Pulitzer Prize winning poet, he studied Nazi propaganda as an Army intelligence analyst during World War II. At the same time, his father, a Nazi propagandist, was in federal prison.

I’m just beginning to read this. Veith talks about the influence of Romanticism. Veith is the Provost at Patrick Henry College and the Director of the Cranach Institute at Concordia Theological Seminary.

Heely compares J.R.R. Tolkien’s The Lord of the Rings with the opera The Ring of the Nibelung by Richard Wagner. This is a very disturbing article because the comparisons between the two works are so clear. They are a strong confirmation of how these streams and risings of Romanticism are really interconnected, whether supposedly “dark” or “light.” (I’ve been trying to make the point for some time that there is no “dark” vs. “light” magic, as is so often represented in modern writing; it is only dark.) In The Ring of the Nibelung, Richard Wagner retells an old German myth about the power of a gold ring. And The Lord of the Rings also tells a story of a magical golden ring. The article mentioned above reveals many other comparisons.

Baue reveals how much secular philosophy there is in Romantic literature, and especially how strongly Platonism and Neo-Platonism influenced C. S. Lewis’s worldview. This influence began early in his life, after he left Christianity. It continued later when he returned to Christianity and lasted up to his death. In fact, his final book, Till We Have Faces, retells a pagan myth. Lewis also incorporates Platonic philosophy into the Narnia stories. This is pretty sophisticated stuff to give to children, and, as a matter of fact, the stories are designed more for adults than for children. (Tolkien's fairy stories also seem designed more for adults than for children.)


Lewis’s work has become so accepted that there is a universal blindness to the philosophy embedded in it. Normally evangelicals do not accept Platonism/Neo-Platonism as their worldview, but through Lewis they have embraced certain aspects of this unbiblical worldview. (Platonism is a philosophy, and Neo-Platonism is more like a way of life.) This acceptance is quite apparent in the ministry of John Piper, by the way. (Watch his video, “Lessons from an Inconsolable Soul” for an amazing demonstration.)

It is astonishing to see in all of these writings how much Romanticism (that is, the love of mythology) has to do with the rise of fascism.

Basically, my research reveals that the same kind of mythology that became the religious and philosophical foundation for pre-Nazism in Germany was also exalted in England and is now wildly popular in the United States. This does not necessarily mean that just because Romanticism is growing in epic proportions in the United States that it’s going to dominate, but it does indicate that seemingly innocent fairytales can have a problematical effect on the mind and imagination, especially of young people.

Such powerful stories and films as The Lord of the Rings and the Narnia series have greatly altered the worldview of many people in the United States and, especially, of pastors and seminary professors. They appear to have very little awareness of the difference between Christianity and Romantic religion. Yet Christians, of all people, should be discerning and aware of the possible dangers of such a movement.

Posted by Richard Nathan at 4:01 PM